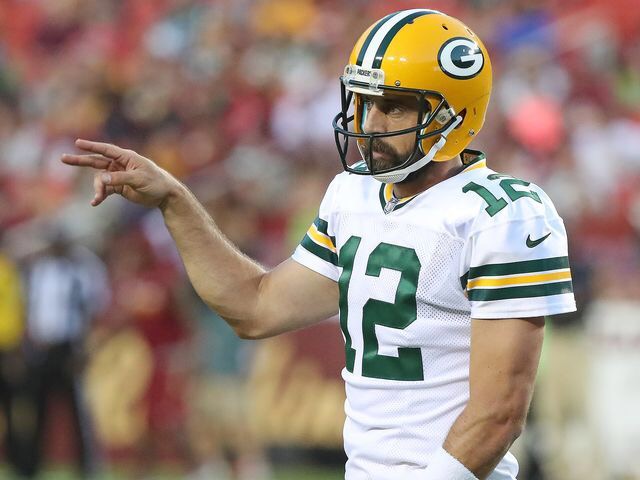 Aaron Rodgers got the “surprise” start in a 21-17 Packers win, Saturday night. Photo via packersnews.com

For a sports nerd like myself (Or nerd in general depending on who you talk to. Coolest nerd you’ll ever know though.) the preseason is a great time. You get to see the building of a team. You able to observe guys “getting it”. Meaning, they are starting to put all of the talent and potential together and becoming an impact on the field.

The other side of that coin is the ugly. You see guys who were supposed to be an impact players regress exponentially, and the injury bug rears its ugly head. The good, the bad, and the ugly is what it takes to build a final roster. The tell tale story are preseason games, which the Packers had last night versus Washington. So let’s run down what I saw.

The quarterbacking was top notch, lead by good ole Number 12. (Aaron Rodgers to the rest of you.) Most were surprised Rodgers started this game as they assumed the third preseason game (vs Denver) would be where he made his first appearance this preseason. Rodgers made the most of his time. He lead a 15 play, 75 yard drive capped off by a TD pass to Martellus Bennett. (A beautiful fade route jump ball that Bennett is going to win every time. Get used to seeing that.) This particular drive showed me all I needed as far as Rodgers goes. The first unit with him at the helm is regular season ready. I need to see more out of the running game. (Broken record as far as this squad is concerned.)

The top notch quarterbacking didn’t end with Rodgers. Brett Hundley went 9-for-10, 107 yards passing, with a TD. (An easy pickings TD pass.) Then there was the rookie, Taysom Hill. That’s right, Taysom Hill. The rook went 6-for-11, 49 yards passing. It was his 23 yard rushing TD that was most impressive. It gave the Packers the lead into the waning moments of the game.

The offense was far from perfect. The offensive line still needs to find ways to open holes for these backs and when there are holes, these backs need to be patient and let the blocks develop. Not run past them and into traffic for a minimal (if that) gain. Work to do still.

The defense continues to be a work in progress. The safety combo of Ha-Ha Clinton-Dix and Morgan Burnett continues to be one of the best in the NFL. No worries with those guys back there. Everywhere else is a roller coaster.

Mike Daniels continues to be stout on the line, but overall (in conjunction with the linebackers) the Packers still aren’t able to generate a pass rush. (One sack in last night’s game.) Something the Packers need in order to not expose the youngsters (like Kevin King) to far too many coverage situations. (Not at least until they get some experience under their belt. They’ll have to develop much quicker than last season season.)

It wasn’t all bad for the Packers on defense. The defining moment of the night was their fourth down stop with just over a minute remaining to stop a driving Washington squad and preserve the win. There’s so much to learn and grow from when you’re thrust into and perform in a situation with the game on the line. Coaches may try to create this in practice, but there’s nothing like the real thing. The defense will grow from this.

Overall it was a good performance from this Packers squad. Areas for opportunity but you can see the execution is there as is the hunger to improve. The quest to build this squad continues.

This site uses Akismet to reduce spam. Learn how your comment data is processed.